This year KPL is celebrating it’s 95th birthday, and with that comes an impressive history of connection to the Kirkwood community and a commitment to fostering learning and creativity. The backbone of KPL has always been the people of Kirkwood. You provide support so that we can stay innovative, keeping up with the changing times, providing resources that benefit your daily lives, while also remaining a warm, welcoming and communal space where you belong amongst the books and library staff. We’re excited to kick off the celebration of 95 fantastic years with you!

This year Winter Reading is all about celebrating the Library’s 95th Birthday and we are giving out the gifts! Sign up for Winter Readings and earn incentives just for reading.

Level 1: 500 pages
One free book from our book sale cart

Thank you to our Youth Winter Reading sponsor
Chick-fil-A of Sunset Hills.

Try out our Winter Reading Bingo with your family for the chance to win the Family Prize Basket that includes essentials you need to spend a cozy winter evening in with your loved ones! Please turn in one board per family for entry into the drawing. To mark off a square at least one member of the family must complete the item listed. Once you have completed Bingo, 5 squares marked off either vertically, horizontally, or diagonally turn the board into any librarian to be entered into the drawing. All boards must be turned in by February 14, 2022. 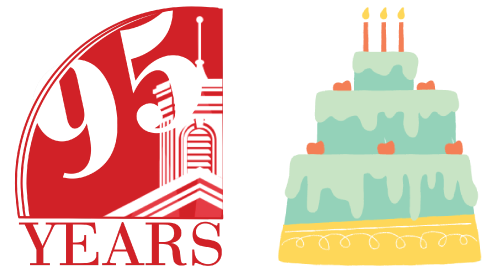 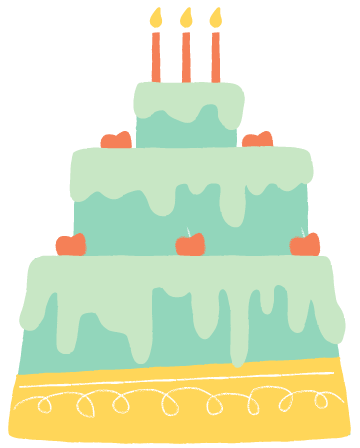 This year as we head into our 95th Birthday we couldn’t think of a better way to celebrate than with a Library Card Design Contest to commemorate three designs on new library cards, one for kids, teens and adults. We were thrilled to see all of the submissions come through, and our committee sure had a tough time making the decision. The winners of the contest were announced at our Winter Reading Kick-Off Day on Saturday, December 11 and the new cards are now available. 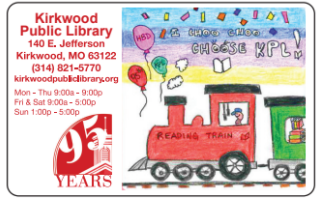 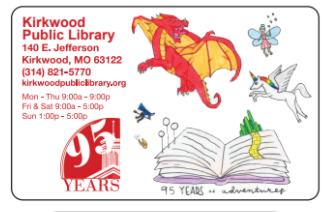 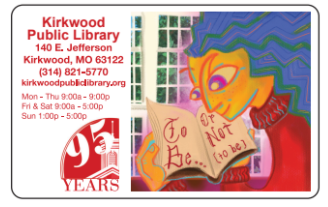 A local arm of the League of Women Voters (LWV) was organized in Kirkwood and one of their earliest endorsements was for the creation of a public library in Kirkwood.  In 1922, the LWV appointed a committee to explore the opening of a public library.  On March 8, 1924, the Kirkwood Public Library committee declared the date “Library Day” for the City of Kirkwood.  Local Boy Scouts collected over 2,000 donated books from local residents to help start the new library.  Volunteers cataloged the donations for use by the new Kirkwood Public Library.

On May 10, 1924, the Kirkwood Library opened on the second floor of City Hall.  Downstairs were City Hall offices and jail.

Just over two years later, on December 10, 1926, Kirkwood Public Library became the first tax-supported library in St. Louis County.  The first meeting of the Kirkwood Library Board was held on April 11, 1927.

In 1940, the new library building cost approximately $41,500 to build (including the purchase price for the lot).

1945 – The Library was given a dedicated phone number, Kirk 1212 – prior to that, it went through the switch board at the City Hall.

1954 – Construction began on the new addition.  The completed extension opened in Fall 1955.

1962 – The Bond issue passed.  Board plans expansion to existing building.  The Board employed Drake-O’Meara Associates as architects.  $115,000 addition was completed in 1964.

2007 – KPL received the “Missouri Library of the Year” award.  Another bond issue passed for another addition.  Voters approved a .12 cent property tax increase, and the Library used .08 cents of the tax to finance the $6.5 million in bonds for renovations. The other .04 cents went toward increasing the library operation revenue.

2009 – Kirkwood Public Library relocated to Station Plaza for 15 months to allow for the renovations.

2016 – KPL received a $733,000 donation from the Earl E. and Myrtle E. Walker Foundation, and the Edward Chase Garvey Foundation, and an anonymous donor to transform the Children’s Room into an interactive center focused on the whole child.

2016 – KPL held a year-long celebration of the 90th Anniversary.

2019 – The library’s cupola was removed, restored and reinstalled.

What once began as a one-room library on the top floor of City Hall has grown into a three-story building housing a wide collection of all types of materials.

Visit the Kirkwood Public Library Digital Archives for more history of the Library and the Kirkwood Community. 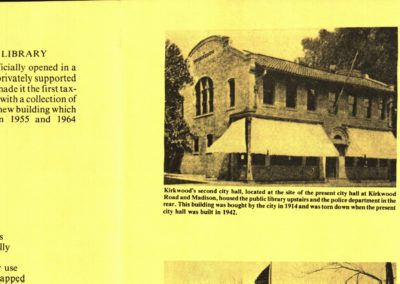 The original Library on second floor of Kirkwood City Hall circa 1926. 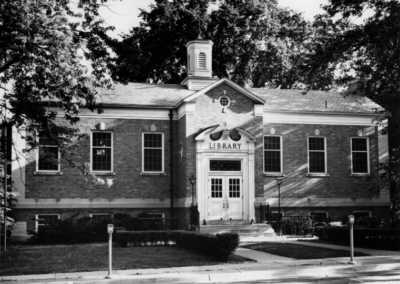 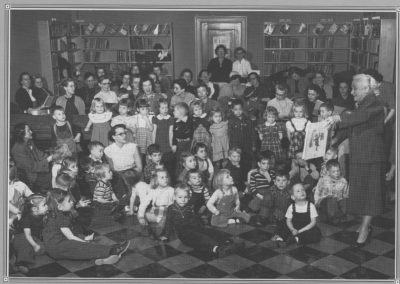 Storytime at the Library 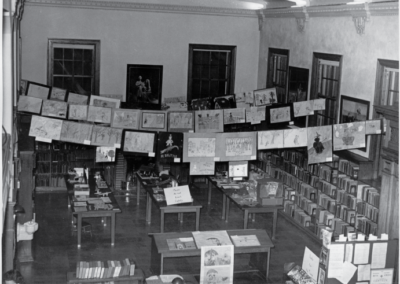 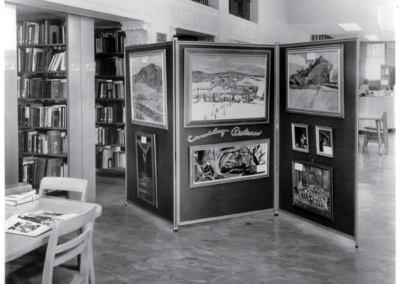 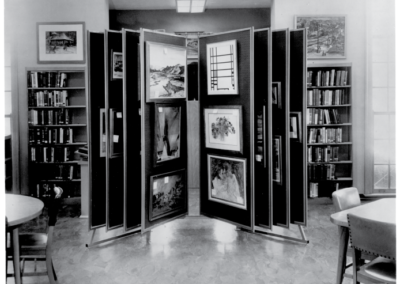 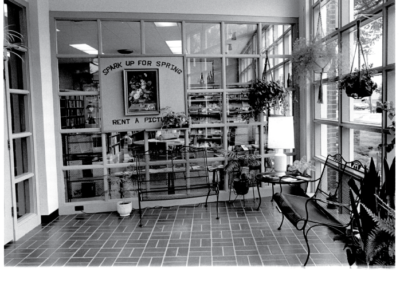 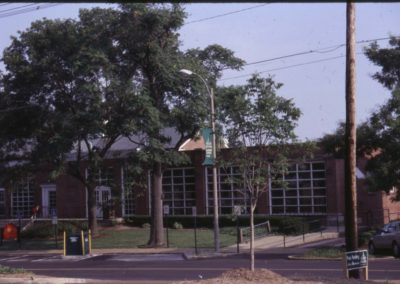 Front of the Library 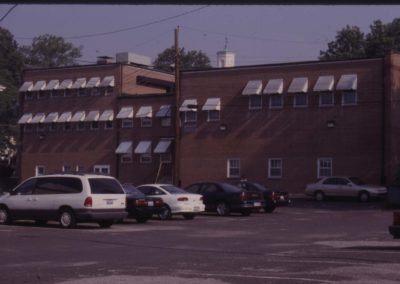 Rear of the Library 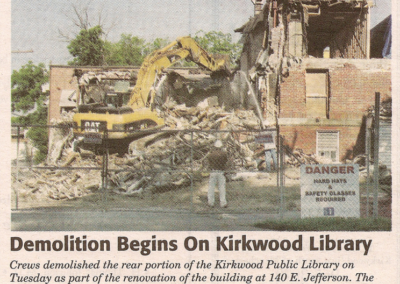 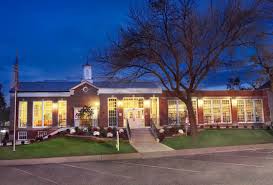 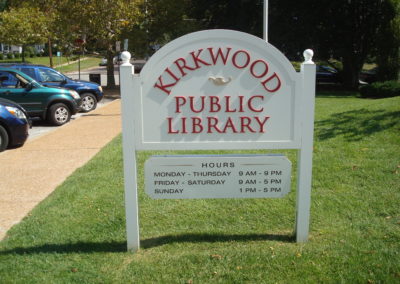 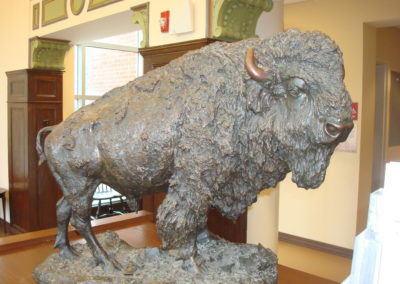 A piece of art formerly displayed in the building. It was sold in 2016. 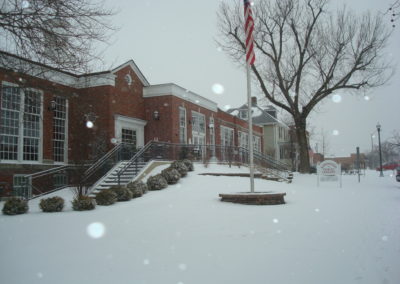 The Library under a blanket of snow 2016. 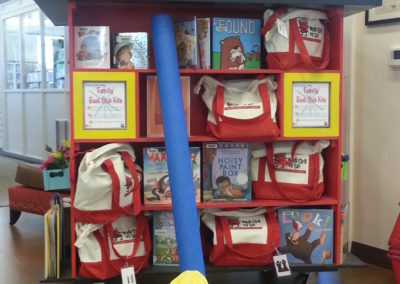 You may recognize this from th Kirkwood Community Center. 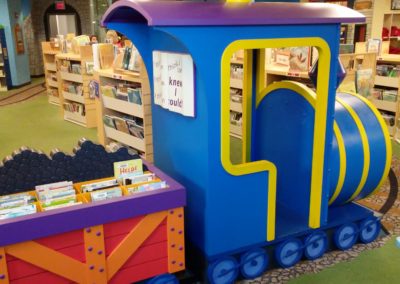 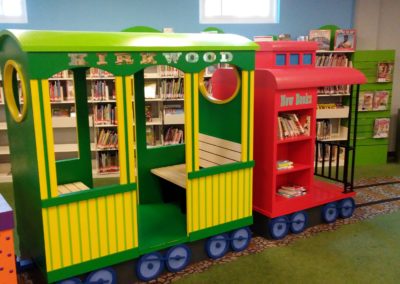 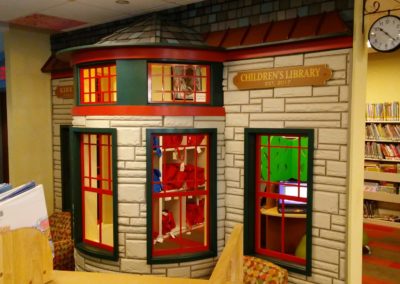 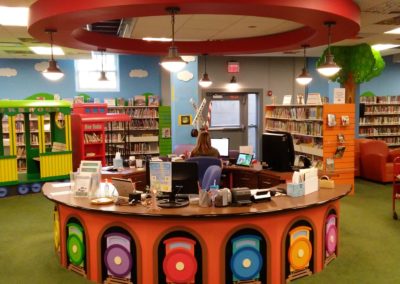 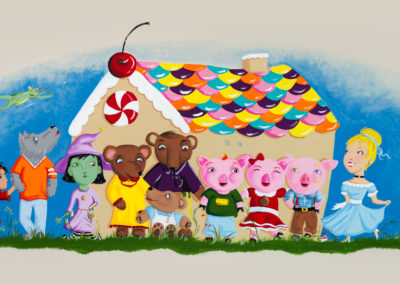 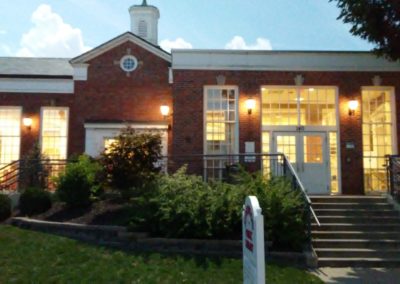 The eclipse caused the outdoor lights to come on. 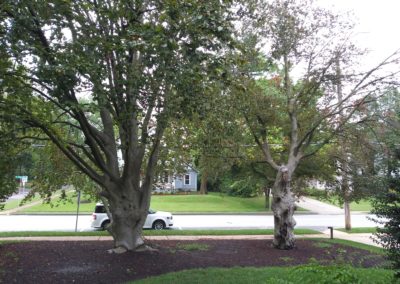 Formerly in front of the library. 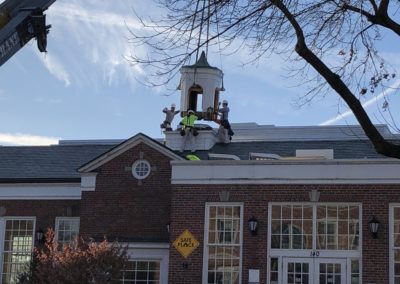