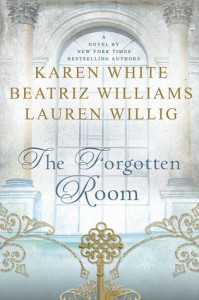 1945: When the critically wounded Captain Cooper Ravenal is brought to a private hospital on Manhattan’s Upper East Side, young Dr. Kate Schuyler is drawn into a complex mystery that connects three generations of women in her family to a single extraordinary room in a Gilded Age mansion.

Who is the woman in Captain Ravenel’s portrait miniature who looks so much like Kate?  And why is she wearing the ruby pendant handed down to Kate by her mother?  In their pursuit of answers, they find themselves drawn into the turbulent stories of Gilded Age Olive Van Alen, driven from riches to rags, who hired out as a servant in the very house her father designed, and Jazz Age Lucy Young, who came from Brooklyn to Manhattan in pursuit of the father she had never known.  But are Kate and Cooper ready for the secrets that will be revealed in the Forgotten Room?

The Forgotten Room, set in alternating time periods, is a sumptuous feast of a novel brought to vivid life by three brilliant storytellers. – from the publisher

This sweeping story spans three generations of women who all seem to have star-crossed lovers in their paths. Each woman’s story takes place in a different era: Olive is a housemaid in the 1890s, Lucy is a secretary in the 1920s, and Kate is a doctor in the 1940s. These women are connected not only by a mansion in New York City, but by their seemingly doomed relationships with men. Each woman discovers the mystery of her past as she explores the house. I found this book to be wonderfully written – it is almost impossible to tell that it was written by three different people! The three stories are well-plotted and mesh well with one another. I have read books by each of these authors, and I was so excited to see they had written a book as a team. While the story is not exactly an original one, it is a great read and definitely a page-turner.