A Look at Hemingway

As the Kirkwood Public Library celebrates our 90th anniversary this year, we’ve been looking back on the year 1926.  A lot was going on–Route 66 was created, the Cardinals won the World Series,  Greta Garbo made her film debut,  and the literary scene was booming with now legendary authors, like Ernest Hemingway.

If the name “Hemingway” only invokes beards, elderly men in fishing boats, and nights of putting off book reports, it could be time to revisit his novels or a book where Hemingway himself is a character! 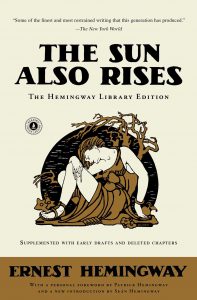 Published in 1926, The Sun Also Rises by Ernest Hemingway is an enduring classic.  The first printing was just over 5,000 copies that sold for $2.00 each.

“It is a truly gripping story, told in a lean, hard, athletic narrative prose that puts more literary English to shame. Mr. Hemingway knows how not only to make words be specific but how to arrange a collection of words which shall betray a great deal more than is to be found in the individual parts. It is magnificent writing, filled with that organic action which gives a compelling picture of character.”

If bullfights, fishing, and drinking aren’t your favorite subjects, there’s plenty more to check out!

Try Paula McLain’s The Paris Wife for a fictional view of Hemingway’s marriage to his first wife, Hadley Richardson (a St. Louis native)!  And if you’d like Hemingway’s version of this same period of time, try A Moveable Feast.  It’s a fascinating comparison, even if Hemingway’s account may be a remembrance of old times through a rosy lens.  He leaves out much of the details about his affair with Pauline Pfeiffer that The Paris Wife explores, and the overall tone of the book is one of regret.

“My,’ she said. ‘We’re lucky that you found the place.’ We’re always lucky,’ I said and like a fool I did not knock on wood. There was wood everywhere in that apartment to knock on too.”

A.E. Hotchner recounts details of Hemingway’s life in Hemingway in Love: His Own Story.  The book tells of the friendship between the two men and gives us a look at Hemingway during the final months of his life.  Wracked with paranoia that he was being watched by the F.B.I., Hotchner’s final conversation with Hemingway takes place in the psychiatric ward of St. Mary’s Hospital.

From fiction to nonfiction, there’s a wealth of information and opinions on Hemingway.  He’s certainly captured the minds of many readers and writers over the years.

Do you have a favorite book by or about Ernest Hemingway?  Share it below!

Emma DeLooze-Klein is the Director of Adult & Community Services at the Kirkwood Public Library. She moved to St. Louis in 2012 and has since enjoyed exploring and photographing area attractions. You can find gothic mysteries, historical fiction, as well as a spread of other genres in her constantly growing to-be-read pile.