← Warm Up to a Good Book Doctor Who meets Doctor Hoopla →

Hello all and welcome to my inaugural blog! 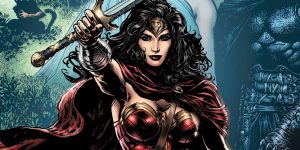 In 2016 we saw many a milestone and perhaps none more important than your very own Kirkwood Public Library’s 90th birthday! Yet, in a close second place, it is worth noting DC comics amazing amazon (and my favorite Justice Leaguer) Wonder Woman turned the 75 years young. With the impending film hitting theaters this summer it Is a perfect time to cover the five “must read before you see” Wonder Woman stories that are available right here at KPL and/or readily available on Hoopla! 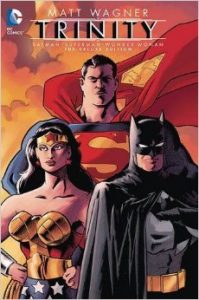 Ok. In truth, this book is as much about Superman and Batman as it is Wonder Woman. Which is the point, they are DC comics Trinity after all. The big three and to that end their relationship is the very corner stone of the Justice League. This book is reimagining of the first team up between these three titans as they race to stop Ra’s al Ghul and his plans for global destruction. Trinity is brought beautifully to life by the Eisner Award winning artist Matt Wagner.

An anthology of short stories is not for everyone but I love them. Much like a sampler, you get a taste of different storytellers and artists you may have overlooked. Sensation Comics stories range from the average to the amazing but each tale worth the read.

Currently piloting the main Rebirth solo title, author Greg Rucka is no stranger to the character. In this celebrated run Diana’s role as an ambassador is front and center. This collection also contains his much sought after story: THE HIKETEIA. A dark tale that due to their individual codes of honor pits Wonder Woman against the Dark Knight himself, Batman.

When the New 52 launched and rebooted the DC universe, it was a mixed bag for comic book fans. Some titles were nothing short of epic….while others…less so… I’m looking at you Teen Titans! None was as impressive as Brian Azzarello’s reboot of Wonder Woman. Intelligent and thought provoking, this six-book story arc focused entirely on reimagining the machinations of the Greek gods and Wonder Woman struggling to save a young mother and her infant son. The run was beautifully brought to life by the stunning art of Cliff Chiang. If there is a singular downside to the New 52 run of Wonder Woman is that the final 3 books were helmed by Meredith and David Finch and were as underwhelming as first 6 was epic. 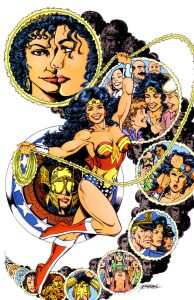 The New 52 was not the first time DC rebooted its universe in the interest of cleaning up continuity; first was the astounding Crisis on Infinite Earth. Back in the 80ies, comic’s legend George Perez captained the post crisis Wonder Woman title and set the standard of what the character would forever be. It cemented Wonder Woman as an ambassador of peace and an Amazonian warrior. Unlike so many of his contemporaries that came before and after, Perez concentrated more on dialogue than action. Storytelling took a front seat as this run dealt with subjects like the morality of war, feminism, drug abuse, the excesses of the 80ies, and a whole host of other social subjects while still finding room in the panels for a punch or two. This book would be the basis for not only the animated film but surely the live action as well. It is a must read before seeing the feature film this summer.

What are your favorites?

Thanks for reading. I’ll see you around the library.