← Talking about Race with Your Kids Fall Food for Fines → 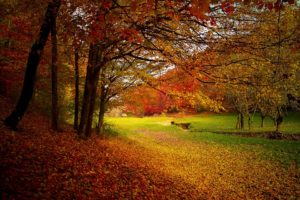 Hello you wondrous patrons and welcome to KPL QI Autumn! Soon we shall close the book on summer 2017 and usher in the fall. What better time than now to chat about some strange and fantastic trivia about this lovely season. Joining me on the panel can be all of you! Just comment below with any facts, trivia, and/or just thoughts about the autumn months you would care to share. I would love to hear from you.

The word autumn comes from the ancient Etruscan root autu and before the 16th century, Harvest was the word of choice to refer to fall season. As more and more people moved from the country and into the city, Harvest lost its reference on this time of the year and autumn and fall became the popular words to use.

Let us look at a fall activity, the Corn Maze. The history of mazes dates back to ancient times but mazes built in corn fields goes back to the long ago days of 1993. Don Frantz and Adrian Fisher created the first corn maze at Lebanon Valley College, in Pennsylvania. It was on three acres and had nearly two miles of pathways. At the time it was certified by Guinness as the world’s largest corn maze. Heavy with pun the corn maze was titled “The Amazing Maize Maze”. 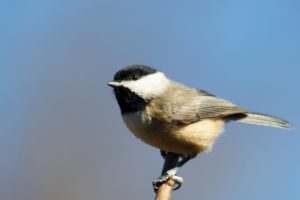 Now consider the black-capped Chickadee, this adorable little bird has an interesting power. During the Fall it’s tiny hippocampus enlarges by 30% which helps it to remember where all its collected seed is hidden to make it through the colder seasons. How helpful would that ability be while searching for pesky missing keys? 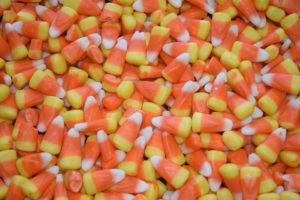 I love all things Halloween, with the exception of one particular staple treat, Candy Corn. This treat was invented in the 1880s by George Renninger at the Wunderle Candy Company and was originally called “chicken feed”.

On to November for National Novel Writing Month, also known as NaNoWriMo, and during thousands of writers pledge to spend getting that novel from brain to paper. Created in 1999 by Chris Baty, when he (and 21 of his friends) vowed to get 50,000 words written in the month of November. Are you the next big novelist and want to participate? A great way to start is visiting your Kirkwood Public Library on October 14 at 10 am for Indie Author Day! Which will feature a panel of fantastic local authors as they talk about their experiences writing, publishing, and taking questions!

It’s time now to head out and purchase pumpkin themed consumables but we will leave you with a quote from American romantic poet, William Cullen Bryant. “Autumn…the year’s last, loveliest smile.” Lovely words for a lovely season.

I’m Ryan. I’ll be in the library. Always enjoy your seasons.

Aug
7
Fri
all-day Book Talk Fridays
Book Talk Fridays
Aug 7 all-day
Tune in each Friday for a new Book Talk with Miss Kim and get inspired to find your next read!    Where: On Facebook and Instagram. Posted at 6 pm.
Aug
8
Sat
3:00 PM Teen Art Club
Teen Art Club
Aug 8 @ 3:00 PM – 4:00 PM
Where: Zoom  Teen Art Club is where teens gather together to challenge their various art skills through creative prompts and chat with other teens while doing it.  This is a live interactive event.  Ages 12-18.[...]
Aug
9
Sun
all-day Virtual Storytimes
Virtual Storytimes
Aug 9 all-day
Join us every Tuesday and Sunday morning for a new virtual storytime geared to children ages 2-5. Where: On Facebook and Instagram. Event will post at 10 am on Tuesdays and at 6 pm on[...]
Aug
10
Mon
6:00 PM Beginner Family Chess
Beginner Family Chess
Aug 10 @ 6:00 PM – 7:00 PM
Want to learn the basics of chess? Sign-up for a session taught by chess maestro Brian J. Feel confident in how to get successfully started and set up for continued play.  Class will meet via Zoom[...]
View Calendar
Add