Hello and welcome for the first time ever to “The Roll of D&D”(it’s a clever pun), a series of blogs highlighting the awe-inspiring exhilaration of the classic role-playing game: Dungeons and Dragons. Many of you do not know me, so allow me to introduce myself: I am Tyler Kim and I am an intern at the Kirkwood Public Library over the Summer. Great! Now that that’s out the way let’s increase our intelligence scores and learn about Dungeons and Dragons. I’m sure most, if not all of you, have been exposed to D&D either through shows like Stranger Things, that one uncle who’s played every single edition, or even through Vin Diesel (yes, he really does play). Either way, you probably have some preconceptions about the culture of Dungeons and Dragons, and I’m here to either confirm them or disprove them. Without further ado, let’s roll for initiative and get right into it. 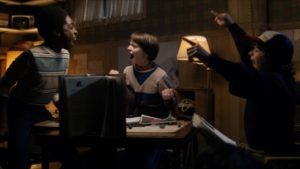 1. Being a nerd is “cool” now, therefore, playing D&D is also cool.

Both of these statements are grossly inaccurate. First of all, it’s not cool to be a nerd, and it never will be. It’s cool to watch Marvel movies and Stranger Things, neither of which makes you a nerd. On a similar token, playing D&D alone doesn’t make you cool. Anyone can roll some dice and kill some goblins, but only true adventurers can negotiate with ancient liches, start fights in a volcano gift shop, and turn into babies using cursed bathtub blood (all of these have actually happened, but those stories are for another time). While these adventures are fun and exciting, no one outside of the D&D community will be able to appreciate them. Therefore, it’s not cool.

2. Nerds just use D&D as a way to separate themselves from reality.

100% true. D&D allows anyone to be a handsome fighter made purely out of muscle regardless of who they are in real life. Dungeons and Dragons is nothing more than an outlet for people to escape their mind numbing day-to-day lives, just like any other hobby. People watch football to enjoy themselves and forget about the pile of work waiting for them back at the office, they like to paint and draw to take a quick break from the chaos of the real world, they go out to movies so they can stop worrying about politics for a couple of hours. 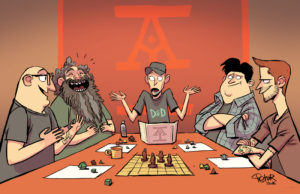 Although it may sound like I’m contradicting the first point I made, this is entirely untrue. My philosophy with Dungeons and Dragons is that it’s for everyone, they just need to find the right group. Whether they just want to do nothing but kill monsters (these kind of players are commonly referred to as “Murder Hobos”), indulge in heavy roleplay (the theatre kids of D&D), or just have good times and think of wacky and unconventional plans to stop the bad guy (my kinda style) there is a group out there for you.

While that may not cover every facet of the classic role-playing game, we certainly made some progress today. If you’re interested in learning more about Dungeons and Dragons come to our summer sessions, starting on Thursday, July 12th. There we will help you make your character and teach the ropes of the game. After that it will be nothing but non-stop fun and adventure in the fantasy realm of Faerun. I’ll even leave a sign up link for you below! With that being said it’s time for me to take my leave. Thanks for humoring my nerdy passions.

If you’re interested in learning more about the world of Dungeons and Dragons here are a few books you can check out through libraries in the MLC.
Second book of the Legend of Drizzt series
5th Edition Player’s Handbook
5th Edition Dungeon Master’s Guide

Feb
26
Wed
10:00 AM Storytime
Storytime
Feb 26 @ 10:00 AM – 10:30 AM
Join us for stories, songs & crafts that encourage the development of early literacy skills.
2:00 PM Drop-In IT (Wednesday Afternoon)
Drop-In IT (Wednesday Afternoon)
Feb 26 @ 2:00 PM – 4:00 PM
Simply “drop in” for help with computers, tablets, the internet and other technologies. No appointment necessary. For one-on-one assistance please refer to our Grab-a-Geek program for scheduled appointments.
4:00 PM Make a Bullet Journal w/Marbled ...
Make a Bullet Journal w/Marbled ...
Feb 26 @ 4:00 PM – 5:00 PM
Make a Bullet Journal and learn how to make a marbled cover. Ages 5-12.
7:00 PM CrAfter Work: Painted Flowers
CrAfter Work: Painted Flowers
Feb 26 @ 7:00 PM – 8:00 PM
Plum blossom flowers are a symbol of perseverance, hope, beauty, and purity in Chinese culture. Create your own watercolor painting of these beautiful flowers! All supplies are provided. This is an adult crafting program. Registration required.[...]
Feb
27
Thu
9:30 AM Books for Babies
Books for Babies
Feb 27 @ 9:30 AM – 10:00 AM
Storytime for babies 6 – 24 months and their caretakers.
2:00 PM Tech Savvy Series: Hoopla, Libby...
Tech Savvy Series: Hoopla, Libby...
Feb 27 @ 2:00 PM – 3:00 PM
The library offers various forms of digital media, from eBooks to streaming movies. Join us for another Tech Savvy Series program and learn how to use Hoopla, Libby, OverDrive, and our newest streaming service, Kanopy.[...]
View Calendar
Add