Hi all! I’m Kirsten from KPL’s Reference Department, and I’m kicking off a series of blog posts about #OwnVoices books! As Jigisha discussed in her blog post here, the #OwnVoices discussion was created in 2015 to highlight books written by and about members of marginalized communities. Here at KPL we’ve been creating #OwnVoices Fiction Lists to better connect curious readers with great titles from our collection while amplifying marginalized voices! This first month’s spotlight is on LGBTQ+ authors.

Here are a few titles to check out from our collection! 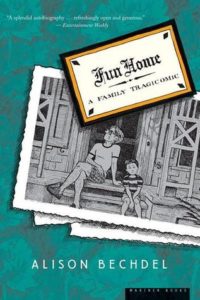 If you have yet to dive into the world of graphic novels, Fun Home is a great jumping off point! Alison Bechdel has been creating cartoons that highlight LGBTQ+ stories since the 1980s, way before the level of representation was where it is today. Fun Home, however, is Bechdel’s first full-length graphic novel and her first memoir. The story centers around her tumultuous yet formative relationship with her father and the effect that his sexual identity had on Bechdel’s life and identity. The story is masterfully crafted through memories, intriguing literary and artistic references, and engaging illustrations. Bechdel’s brainy writing style ties together this creative, engaging, and affecting story in a way that will inevitably leave the reader reflecting on their own family and identity. (Bonus: Bechdel recently published Are You My Mother? — a follow-up graphic novel analyzing her relationship with her mother through the lenses of psychoanalysis and the writings of Virginia Woolf!)

2.The Price of Salt by Patricia Highsmith 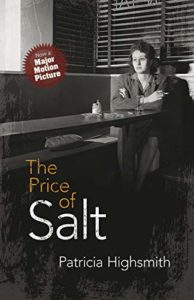 One of the older titles on our list comes from 1952; The Price of Salt is the love story of two women that — spoiler alert! — actually has a happy ending! This was a rarity at the time of publication as the majority of lesbian stories written at that time ended tragically. Patricia Highsmith (known best for her psychological thriller Strangers on a Train), first released this novel under the pseudonym Claire Morgan in fear of being labeled as a “lesbian author”. The world has come a long way since the more repressive days of the 1950s, however, and Highsmith’s story has recently gained popularity. It reached an even larger audience through its adaptation for the film Carol (2014), starring Rooney Mara and Cate Blanchett in the leading roles. The Price of Salt holds up extremely well today thanks to its deep exploration of character, expertly measured suspense, and Highsmith’s elegant writing style. You will get swept away by The Price of Salt — you can find both the book and the film adaptation, Carol, at the Kirkwood Public Library!

3. If You Could Be Mine by Sara Farizan 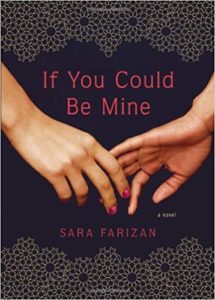 A highlight of the YA entries on our list is this tale of Sahar, a teenage lesbian living in Iran and facing the difficult fact that the girl she loves is about to marry a man. If You Could Be Mine is a Winner of the Lambda Literary Award for LGBT Children’s/Young Adult as well as one of Rolling Stone’s 40 Best YA Novels. This story is diverse in its representation and features multiple queer and trans characters in a positive light. Similar to how stories featuring lesbian characters often ended tragically 60 years ago, trans characters in contemporary fiction are often portrayed as tragic, tormented, and doomed. It is refreshing to see the trans characters in If You Could Be Mine portrayed in a better light. Farizan’s book is also notable in its exploration of the ways in which LGBTQ+ people in Iran handle the crossroads between their identities and their cultural norms — for instance, while homosexuality is considered taboo in Iran, gender reassignment surgery is not. Although the intended age range for If You Could Be Mine is 12-18 years old, this book, which Kirkus Reviews calls “A moving and elegant story of first love and family”, is a unique and engaging story for readers of all ages. 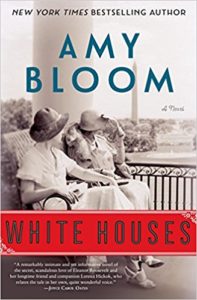 For the history fans out there, White Houses by Amy Bloom explores the possible relationship that may have occurred between Eleanor Roosevelt and Lorena Alice Hickok. As mention of the two women’s’ relationship was actively erased by the media of the day, Bloom’s story is a partly factual and partly imagined tale of how Alice, a poor reporter from South Dakota, ended up living at the White House during the Roosevelt administration — her relationship with Eleanor Roosevelt kept as an open secret. Bloom’s prose is engaging, and her portrayals of both Lorena Alice “Hick” Hickok and Eleanor Roosevelt are sure to challenge and stretch readers’ ideas about the way in which history is remembered, reported, and reshaped depending on whose voice is telling whose story. Pick up this title either in print or as an audiobook from KPL! 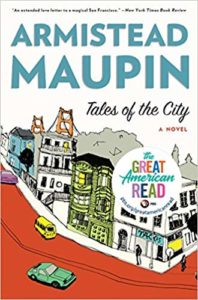 5. Tales of the City by Armistead Maupin

Another classic from our list is Maupin’s love letter to 1970’s San Francisco. Originally released as a serialized column in the San Francisco Chronicle, Tales of the City is the first book in a series of nine that chronicles the daily lives and antics of a memorable cast of characters living together in an apartment building at 28 Barbary Lane. Due to its serialized release, Maupin was able to interweave current events and influences from the time, ranging from entertaining insider references to commentary on the developing AIDS epidemic — a monumental feat for its time. Tales of the City was recently celebrated as one of the top 100 Great American Reads, and now is the perfect time to introduce yourself to Maupin’s series as Netflix has announced a miniseries adaptation coming out later this year starring Elliot Page and Laura Linney! (Since, of course, the book is always better than the movie/tv show/etc… ?)

These are just a few of my favorite selections from our list that we have available through Kirkwood Public Library and the Municipal Library Consortium. You can check out the list as well as additional titles here.  Also, let us know which titles from this list you enjoyed! Are there other #OwnVoices LGBTQ+ books you’ve discovered on your own that you’d like to add? Let us know! Happy reading, all.

Kirsten Benson is a Reference Librarian at the Kirkwood Public Library. She began working at KPL (and moved to St. Louis!) in the summer of 2018. She has a fondness for coffee shops, cult cinema, zines, and poetry, and she can be found reading Neil Gaiman, Frank O’Hara, and Sylvia Plath