So, You Wanna Play Dungeons and Dragons? 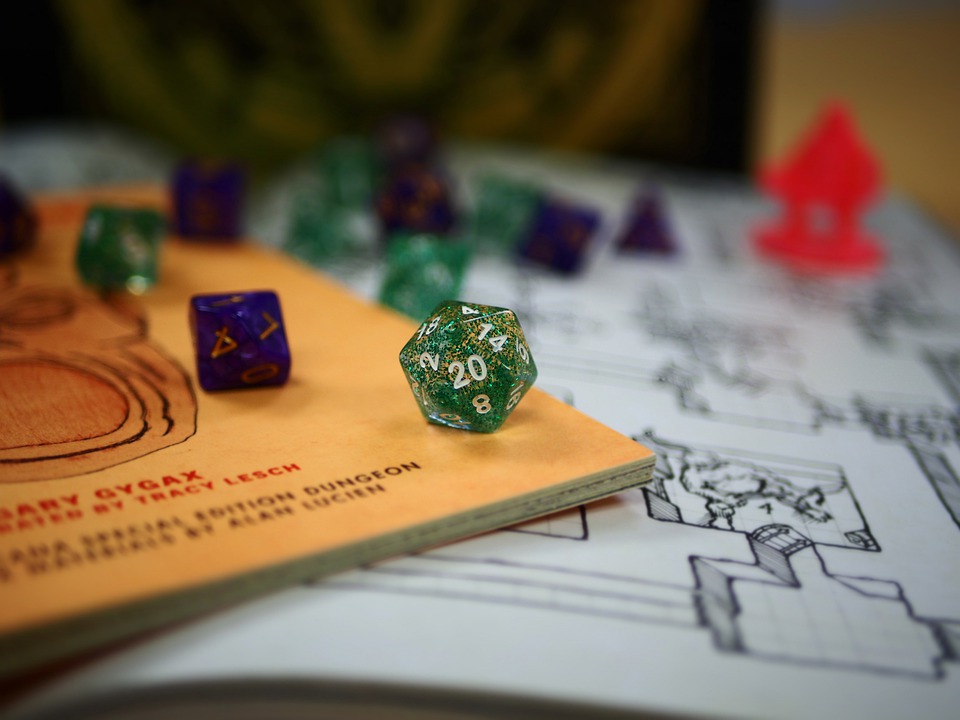 Some of you may be wondering, “What exactly is Dungeons and Dragons (DnD)?” It’s a great question because to a lot of people, including me before I started playing, DnD comes across as very overwhelming and confusing. What’s with all these dice? What the heck is a D20? Don’t worry, we’ll get there. But first, let’s answer the question!

DnD is defined as a “tabletop role-playing game” but that can be confusing too. DnD is kind of like a “Choose Your Own Adventure” book, where you pick which path you want to take in the story and the outcome changes. DnD differs from the “Choose Your Own Adventure” books slightly because it involves adventuring and oral storytelling with a group of friends or family. It also involves creating the story in the present rather than reading a story already written. You can also compare DnD to a video game where your character interacts with the world and gets quests but again, you are playing with multiple other people.

So, for example, my DnD group is an adventuring party in a fantasy world who go on missions for the people in that world. A wizard got an ancient artifact stolen, and it’s our group’s mission to get the artifact. We make a series of choices and have conversations about how to best complete the quest, whether that be asking townspeople if they saw any suspicious activity, using magic to find it, etc. Once we find the artifact, we end up meeting a big bad villain who is causing havoc throughout the world. Our group decides to try and take down this villain and become heroes. Or, we decide to side with the villain instead and become bad guys. There’s various paths you can take in the story and there’s no wrong path to take.

Next is how to start telling that story. First, you need to find someone to play the role of Dungeon Master/Game Master (DM or GM). The DM is the person who creates the story, the world, and the people in that world for the players to explore and navigate. You could consider the DM the narrator of the story, which is a big role to play.

The world and the story the DM creates doesn’t have to be in-depth or vast like the world we see in fantasy like Lord of the Rings or Game of Thrones. It can be simple, like a small town that the players do missions for. It’s best for a first-time DM to start with smaller stories to tell. DnD Beyond, the official site of DnD, is providing free modules here and here to play which are laid out stories for first time DMs to set up for their players.

To help figure out the role of the DM and what to do, watch this video about how to DM for absolute beginners! There is also a DM video series given by popular DM Matt Mercer here to watch for more information afterwards.

After the DM has been established, now it is time for the players to make their characters. The players are the main characters in the story who usually make the most impact on the world they are in. They’re all like the Fellowship of the Ring. The players need to determine what class they want to play, be it a wizard, barbarian, or druid. You can also choose a fantasy race to play like an elf or gnome. Players can read about each class and race on DnD Beyond. These characters will be the heroes (or villains) you decide to play in the story the DM tells.

The complicated part is the rules of DnD, which involves all the dice, numbers, and character stats. The reason for the dice is that they determine whether the characters of the story succeed in what they choose to do. Let’s say my wizard wants to try and decipher a spell in another language that is important to our quest. I have to roll a die to see whether or not my wizard succeeds. DnD is also a story of chance and the involvement of dice gives the story more unpredictability and excitement because if I roll my die poorly, then our quest is paused until my wizard can figure out what to do. If I roll high, then our quest continues forward. Dice rolls can change the entire course of the story. You definitely don’t have to buy a set of dice to play DnD because there are online dice rolling generators to use instead.

A YouTube channel called Don’t Stop Thinking does a great series on how to play DnD and gives more explanations about the rules and mechanics.

There is a lot to learn with DnD, but I hope I was able to demystify some of the complications and provide some resources for those who are interested in learning how to play. Ultimately, DnD is about telling a story with friends or family and having fun together. The main goal of DnD is to have fun! Even though there are lots of rules, you can always tweak them and make them simpler for your own group’s play style.

When I heard about people who played DnD, I thought it was way too complicated and involved for me but a few friends convinced me to give it a shot. After playing for two years so far, DnD has had a positive impact on my life. My friends and I have grown closer, my creativity and confidence have grown through creating and playing characters that are very different from me, and I’ve had a chance to imagine what life would be like exploring a fantasy world. I hope others can be impacted the same way.

Playing with family and kids

Mariah Pugliese is a Reference Librarian at the Kirkwood Public Library. When not at the library, she enjoys reading and writing sci-fi/fantasy and taking care of her 25+ houseplants who are all named after fictional characters in literature.