← So, You Wanna Play Dungeons and Dragons? Small Ways to Take Care of Yourself → 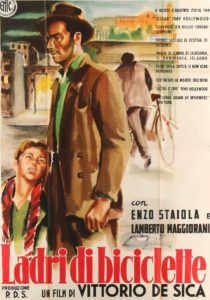 This is probably the third time I’ve written something about Bicycle Thieves.

Before I went to film school, I had to pick a film from a pre-approved list and write an essay for it on my application. Something about the story of Bicycle Thieves appealed to me. A poor man named Ricci finally finds work for which he must acquire a bike. He buys the one he pawned by selling his bed sheets. On the first day of the job, his bike gets stolen by a thief. Desperate, he recruits his pre-adolescent son, Bruno (who has to take off from his job), to search Rome for the bike.

It’s a simple premise— easy to grasp, with notes of sadness and vague hints of adventure. This solid but uncomplicated through line suggests a compelling narrative with room for spontaneity, digressions, and colorful side characters. Bicycle Thieves does, indeed, contain these basic elements in multitudes, but that very simplicity conceals a heartrending emotional drama bubbling under the surface, fueled by the tragic realities of post-war Italy’s decimated economy. 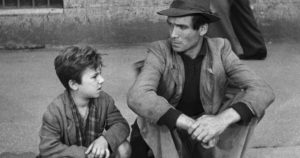 During this period, director of Bicycle Thieves, Vittorio De Sica, and others such as Luchino Visconti and Roberto Rossellini began making films as a part of a movement called Italian Neo-realism. Depicting the stories of ordinary people affected by poverty and disenfranchisement, these films were often made on location and used non-professional actors. De Sica co-wrote the script with major neo-realist screenwriter Cesare Zavattini in order to situate his story in the midst of this depression. Since most scenes take place on the streets of Rome, there’s a plethora of stories occurring on the perimeter of the plot. A group of catholic priests struggle to take shelter in the rain. A hoard of commuters cram into a bus. When Ricci and a police officer argue in the apartment of the alleged thief, a woman with a baby from the neighboring apartment looks on and then slowly closes her window. 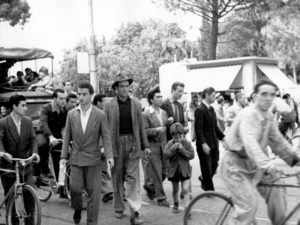 Lamberto Maggiorani was a factory worker before he was cast as Ricci, and unfortunately he didn’t get much work after the film was completed. His performance is gruelingly authentic. Of course, part of what makes him effective is his physical appearance. Tall, lanky, and gaunt, he convincingly looks the part of a malnourished, impoverished father. Maggiorani effortlessly uses these attributes to craft a moving and emotionally intense performance, directed impeccably by De Sica, who was an actor, himself. It’s subdued, for sure, but his expressions positively fill the scenes with anguish, specifically in the pivotal bike theft. 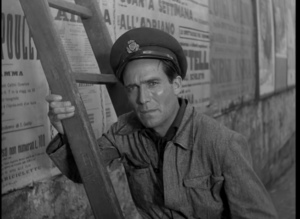 Enzo Staiola as his son, Bruno, is just as impressive. De Sica spotted him on the street before casting, going on instinct rather than a rigorous casting call, an amazing fact given how invaluable he is to the film. Despite his age, Bruno acts more like an equal to Ricci, a partner of sorts. They seem more like brothers than father and son, and consequently the role requires a good deal of nuance that most kids that age wouldn’t be able to grasp.

A major draw for Bicycle Thieves is its cinematic significance and historical interest, but the emotional arc of the story makes it unforgettable. I challenge you to watch it and not tear up.