← Understanding Black Lives Matter and Resources to Enact Change What is civics, and why is it important? → 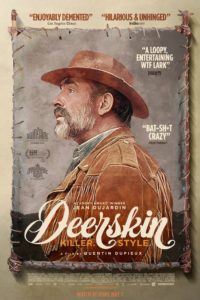 This is a truly bizarre film. It’s 70 minutes long, so while it may be alienating to some, I give it a full recommendation because it will not take up much of your time. If you remember Jean Dujardin from The Artist, you’ll recognize the protagonist of Deerskin. Here, Dujardin plays an an unassuming man named Georges, recently divorced and in need of a jacket (the opening of the film depicts him removing a rather nice looking coat and shoving it down a gas station toilet). At a scrappy dealer’s abode, he purchases a wildly expensive deerskin jacket, complete with gaudy tassels and pockets. It’s not entirely clear why Georges is so obsessed with this jacket, other than the macho-western look it gives him. Perhaps the discarding of his coat and the acquirement of his jacket is meant to tell us something about the life he lived versus the life he wants. Regardless, he relishes in the sense of distinction this jacket gives him, humblebragging about it at the rustic inn he checks into in rural France and filming himself in it with the camera he acquired as an odd bonus from the dealer. Soon, he begins talking for the jacket, carrying out conversations in which the jacket wishes to be the only jacket in the world. Georges, with the help of an ostensibly naïve and impressionable bartender named Denise (Adèle Haenel from Portrait of a Lady on Fire) that he’s tricked into thinking he’s a filmmaker, sets out to grant the jacket’s wish. His attempts at ridding the world of other jackets takes a sharp turn into violence.

Deerskin starts off as a quirky character piece about strange fixations, much like the indie-favorite Lars and the Real Girl with Ryan Gosling. But as it goes on, it ramps up the weird until it’s in full on absurdist slasher mode. The dadaist story and black comedy makes for very entertaining viewing, but the themes seem somewhat obscured. His critiques of materialism, vanity, and even filmmaking have a clear and deliberate presence, but aren’t entirely cogent. I can’t decide if director Quentin Dupieux strives to be deliberately unclear or not, or if multiple viewings will clarify or further muddle things. Either way, the film drew me in with a wonderfully committed performance by Dujardin and an uncanny atmosphere. I can’t help but love it despite not knowing if it’s “good” or not. 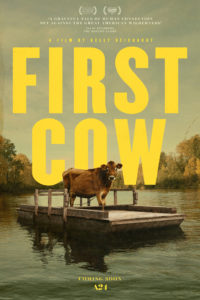 Kelly Reichardt returns to the profundity of nature and the soulful connection between outcasts as themes in First Cow, which bares the closest resemblance to her 2006 buddy road film Old Joy (available on Criterion). Temporally it belongs to the string of films she has set in the 1800s, this time taking place in the Washington Frontier, where food sources are scarce and unvaried. When gentle and sensitive Otis “Cookie” Figowitz (John Magaro) befriends the mysterious but easygoing Chinese immigrant King Lu (Orion Lee), he’s set on a path that departs from the gruff fur trapping outfits he’s been accustomed to. While more in keeping with his soft nature, this enterprise will lead him to to a perilous result. Wanting to get a baking business off the ground, Cookie and King, living together in a modest shack in the woods, conspire to steal the milk from the first cow imported to the territory, which belongs to a highly respected, aristocratic Englishman (Toby Jones). Despite the whimsical and quaint notes suggested within the premise, the film notably contains melancholy and tragic ones throughout. The film’s greatest attribute is the sensitive portrayal of male friendships. Some read the central relationship between King and Cookie as romantic, but in the end it doesn’t really matter. Their tenderness, softness, and compassion stands as a counterpoint to the characteristics of the men around them, who fall into more traditional and domineering roles, harsh and competitive and unforgiving, less inclined to vulnerability or grace. First Cow delves into the often unseen and unspoken qualities of plutonic male affection, resulting in a refreshing and novel representation of non-traditional masculinity.

The Girl With the Bracelet 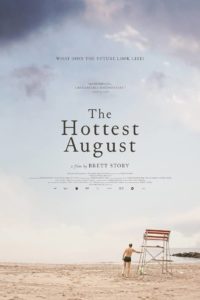 Although purportedly a documentary on climate change, you won’t hear much mention of the issue. Director Brett Story instead takes a circumventional approach, ruminating not on “how” we got here, but why. In an observational, episodic manner, Story follows a large swathe of New Yorkers who speak at length about their lives when asked to talk about the future. They speak of their worries, their hopes, their dreams, but mostly they ignore the central question. They stick to the present. They talking about their situations, many of them inescapable. They talk about job security, racism, poverty, and other realities. Beautifully shot and photographed, and with wonderful sound design, The Hottest August is a thoughtfully constructed, highly controlled film despite its loose-seeming flow and on-the-fly moments. It takes advantage of its aesthetic powers to compellingly and hypnotically illustrate the country (and maybe the world’s) inability to grasp what lies ahead, to imagine the consequences, and to put any focus on the fate of our species when large societal injustices and challenges immobilize us and keep us living day to day. 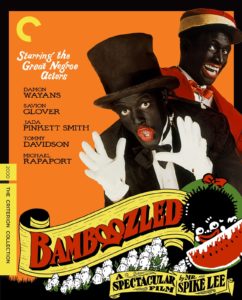 Nov
29
Mon
all-day Teen Relaxation Crafts
Teen Relaxation Crafts
Nov 29 all-day
Mondays, 11/1, 11/,8 11/15, 11/22, 11/29 Receive awesome relaxation crafts each week for the month of November. Supplies will be provided by the library. Pick up in the Teen Room. No Sign-up needed.  Just[...]
7:00 PM NaNoWriMo Write-In
NaNoWriMo Write-In
Nov 29 @ 7:00 PM – 9:00 PM
Are you motivated by the company of others? Writing doesn’t have to be a solitary act. Meet up virtually with your fellow NaNoWriMo writers! The library will provide the Zoom, you provide the words. This[...]
View Calendar
Add