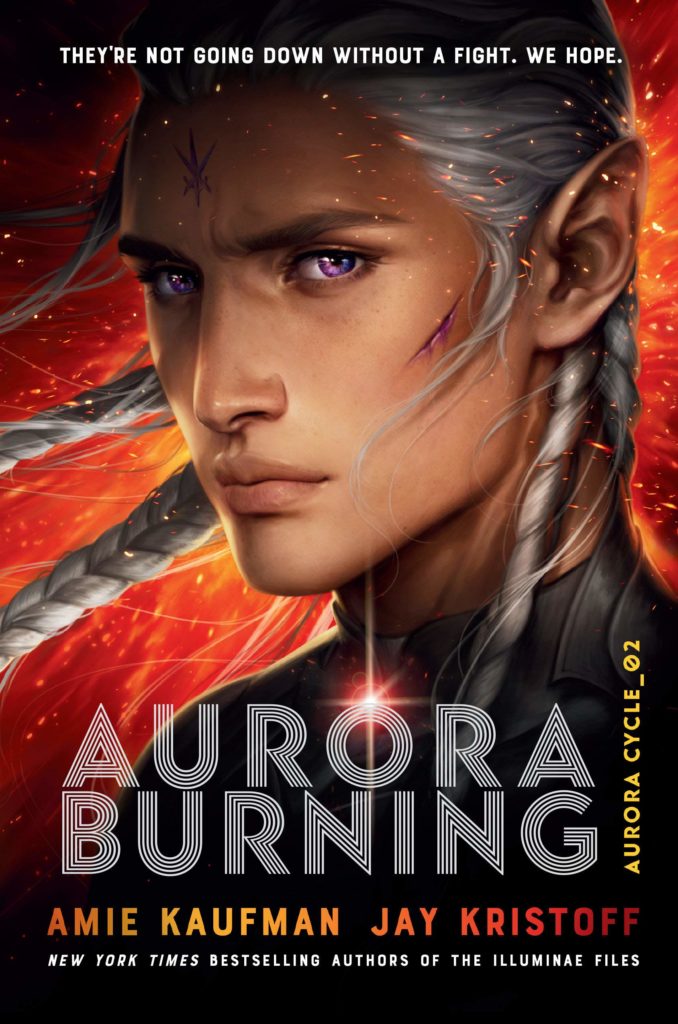 Following the first book we are reintroduced to several characters. Aurora, Tyler, Zila, Scarlett, Finian, and Kal. These guys all met during their education at the Aurora Academy. All except for Aurora that is. Now as they are on the run from the Global Intelligence Agency and a parasitic alien species that wants to take their consciousness, they are met with the problem of Kal’s family coming to regain their son–all while trying to destroy this alien species. Little does the crew know that Kal’s family will have more to do with their hope of destroying the alien species than they would’ve thought…

Coming off of the first book, this book offered the same characters and same general conflict. The first book was a great and engaging read. However one issue for me was how the romance between Kal and Auri was written. It felt superficial and it seemed like they only showed affection during times of weakness, rather than a balance.

However, I think the relationship dynamic between Tyler and Saedii worked really well. There seemed to be a slow burn that eventually led up to a relationship forming. It was kinda a familiar trope (enemies to…not enemies) but it was written in an engaging way, leaving readers wanting more. I really enjoyed reading about them. I must say, that was a much better relationship than Kal and Aurora. It was also very interesting to see everybody coping with the death of Kat, especially the twins.

I was annoyed when, at one point of the book, the crew all got mad at Kal. They were angry at him for his family relations. The whole thing seemed a bit hypocritical, considering some of them had bad relations to their own families. They blamed Kal for what his family had done and refused to listen to his perspective. For people that really cared about him, they were really quick to get rid of him once they learned who his father was. Also, he was really quick to go back to his family. After grappling with the beliefs and lifestyles that his family was sure to force on him, and that he was sure to refuse, he went right back to them. I was never really convinced by that whole thing.

If you could take Kal out of the picture, this would’ve been a much better book. I did think his characterization was good, other than the parts I mentioned. All of the characterization was great, ESPECIALLY ZILA. I really loved reading from her perspective. The relationships between most of the characters (ahem ahem NOT Kal and Aurora) were awesome. I also want to give a little shout out to Scarlett’s perspective.

I also CANNOT believe they ended it on a cliffhanger… I need to know what happens next!!

Interested in reading this book? Head to our website now where you can get a physical copy or check it out on Overdrive/Libby.

Shanon Barton works in Youth Services at the Kirkwood Public Library. She started volunteering for KPL when she was in 7th grade and loves that she gets to work there as her “real adult job.” When not hanging out in the stacks at work, she can be found at home watching Netflix, eating pizza rolls, and planning themed events with friends. If you catch her with her nose in a book, it will most likely be a YA historical fiction novel with some sprinkling of supernatural or magical elements.

Oct
25
Mon
all-day Halloween Preschool Party
Halloween Preschool Party
Oct 25 all-day
Halloween Preschool Party Ages 3-6 Monday, October 25, 2021 Ready to do the monster mash? Throw a party at home with crafts, activities, and a virtual storytime!  Sign up required, pick up supplies by Oct.[...]
7:00 PM NaNoWriMo Q&A
NaNoWriMo Q&A
Oct 25 @ 7:00 PM – 8:30 PM
Do you want to write a novel? Join Municipal Liaison Jennifer of the St. Louis region of National Novel Writing Month for a Q&A session about the month-long writing program that happens every November. Ask[...]
Oct
27
Wed
7:00 PM Adult Craft Night: Canvas Treat ...
Adult Craft Night: Canvas Treat ...
Oct 27 @ 7:00 PM – 8:30 PM
Get ready for Halloween by designing a spooky stamped canvas bag to hold all your treats. All materials will be provided. Masks are required for this in-person meeting. Registration is required and attendance is limited.[...]
Oct
28
Thu
all-day Books for Babies Storytime with ...
Books for Babies Storytime with ...
Oct 28 all-day
October 28, 2021 Sign up for Books for Babies storytime with special guest, Author Amy Sklansky, who will read from her new board book, Knock Knock, Trick or Treat!: A Spooky Halloween along with a[...]
all-day Halloween Craft
Halloween Craft
Oct 28 all-day
Halloween Craft Ages 5-12 Pick up Thursday, October 28, 2021  No sign-up, pick up while supplies last. Description: Get into the Halloween spirit with a spooky cute craft! Pick-up the supplies in the Children’s area. [...]
View Calendar
Add