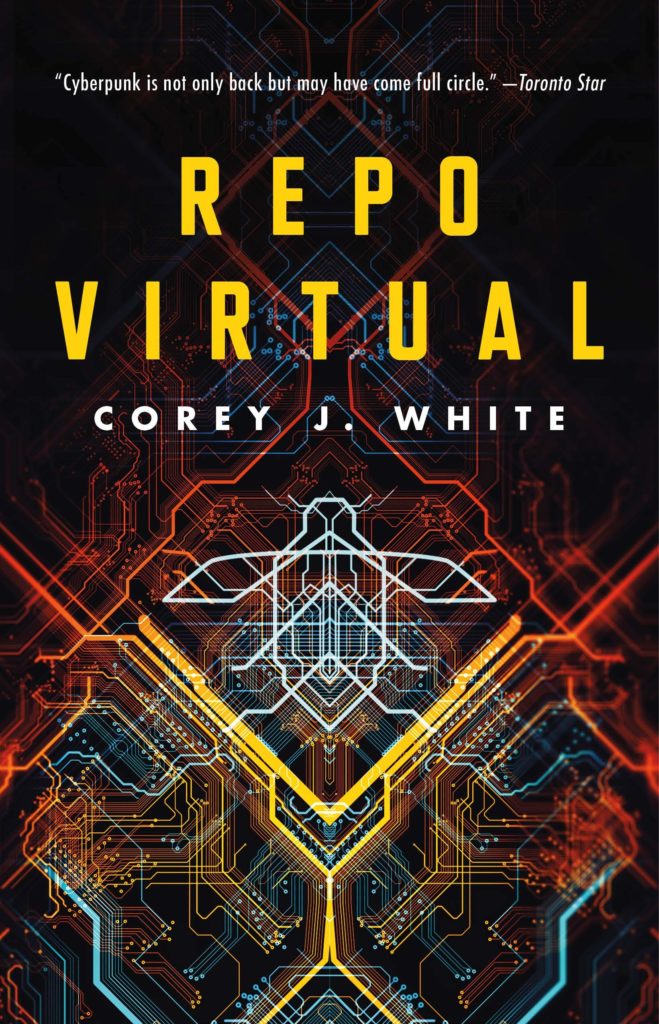 (May 2021) This book was great! Repo Virtual is an engaging book following robot-repairman JD in Korea. This world presents a unique challenge, the effect of failed autonomous capitalism on a city. He does thieving work in the virtual world of VOIDWAR. Communication with his sibling, Soo-Hyun leads him into the dangerous world of cults and a power hungry woman who gives him an offer he can’t refuse. He is hired to steal something in real life but soon is left to grapple with attempting to figure out what he stole.

I was immediately pulled in by the starting action of the story, in which we met the main character. The beginning roped us in and got me interested in the idea of this virtual world. Right away I was in love with the world building of this story. It was futuristic from a technological standpoint but entirely realistic with poverty, crime, and its take on capitalism. I related to a lot of the characters. One of the main characters, J.D. really got me thinking about the role of individuals in a capitalistic economy. He spoke realistically about passion in the workplace. That was one of the things I held in my mind throughout the entire book.

Another thing I liked about the book was how they wrote relationships between characters. The author allowed us to see many sides of different characters, and slowly introduced different aspects of each character which led to some great character development. I feel like you could tell a lot about the characters in the first parts, and then be able to look back on certain events and pinpoint character traits (cough cough Kali).

The author also wasn’t afraid to go into social issues and the implications of them in a futuristic world. He certainly didn’t shy away from representation as well, without overwhelming the reader with constant information about it. There were members of the LGBTQ, Black, and Indian communities, people with different views, young people, and robots even. It was there, and it was casual. Many different groups could see themselves represented in this book.

The way that the author wrote the a.i was fascinating and engaging. The twist with the psychological implications on technology was stunning and it was another aspect of the book that got me thinking. I also liked the way it was set up, with the a.i being in the first perspective, and the other stories being third. I wish we could’ve spent even more time inside of the a.i’s “head.” But, at the same time, I think the other storylines were more necessary and I’m glad the author did not spend too much time writing from the a.i’s perspective.

One thing that I wished had been different is just the way the book was divided up. I think there was a lot of time spent on developing the characters and set up, and less time on the actual conflict and rising action. I would’ve liked to see some obvious foreshadowing or stuff like that in the book.

Interested in reading this book? Head to our website now where you can get a physical copy.

Shanon Barton works in Youth Services at the Kirkwood Public Library. She started volunteering for KPL when she was in 7th grade and loves that she gets to work there as her “real adult job.” When not hanging out in the stacks at work, she can be found at home watching Netflix, eating pizza rolls, and planning themed events with friends. If you catch her with her nose in a book, it will most likely be a YA historical fiction novel with some sprinkling of supernatural or magical elements.

Jun
21
Mon
all-day Imagination Challenge
Imagination Challenge
Jun 21 – Jun 26 all-day
Imagination Challenge Ages 6-12 June 21-26, 2021 Give your brain a break and stretch your imagination (and sometimes your legs)! Enjoy a collection of easy and fun screen-free activities. Each week during June and July[...]
Jun
24
Thu
all-day Kids Science
Kids Science
Jun 24 all-day
Kids Science  Thursday, June 24  Spark your child’s interest in STEM with easy and fun science experiments that you can try at home! Pick up a bag of supplies to do the experiments along with[...]
Jun
26
Sat
10:00 AM Books & Beyond on the Lawn
Books & Beyond on the Lawn
Jun 26 @ 10:00 AM – 3:00 PM
Shop a selection of regular and sale priced items outside, then take a “sneak peek” at our gift shop indoors. Look for a return to regular Books & Beyond hours soon!
10:00 AM Saturday Morning Perks
Saturday Morning Perks
Jun 26 @ 10:00 AM – 11:00 AM
Join us for a virtual book discussion! This month’s book is Transcendent Kingdom by Yaa Gyasi. Please sign up using the form below to receive a meeting invitation.
2:00 PM Yeyo Arts Program for Teens
Yeyo Arts Program for Teens
Jun 26 @ 2:00 PM – 3:00 PM
Social Justice Mixed Media Art: The Roots of Racism, Ageism, and Classism Saturday, June 26 from 2-3 PM Ages 12-18 Are you interested in learning and honing mixed media art skills with a focus on[...]
Jun
27
Sun
all-day Virtual Storytime
Virtual Storytime
Jun 27 all-day
Virtual Storytimes Sundays June 6, 13, 27, 2021 Join our virtual storytime e-mail list to receive a new storytime video every week on Sunday! Count storytime towards your hours for the Children’s Summer Reading program.[...]
1:30 PM Virtual Kids Knitting It Forward
Virtual Kids Knitting It Forward
Jun 27 @ 1:30 PM – 3:00 PM
Attend the Kids Knitting It Forward meeting that would have been held at KPL through Zoom. Email kidsknittingitforward@gmail.com for the Zoom meeting info. Where: Zoom
View Calendar
Add