“This captivating exploration of Alver Aalto, the defining figure in Scandic design and one of Europe’s greatest modern architects, focuses on his remarkable and loving partnership with wife, Aino.”

“A group of seniors train to become police officers and Border Patrol agents at El Paso’s Horizon High School, near the U.S./Mexico border.” 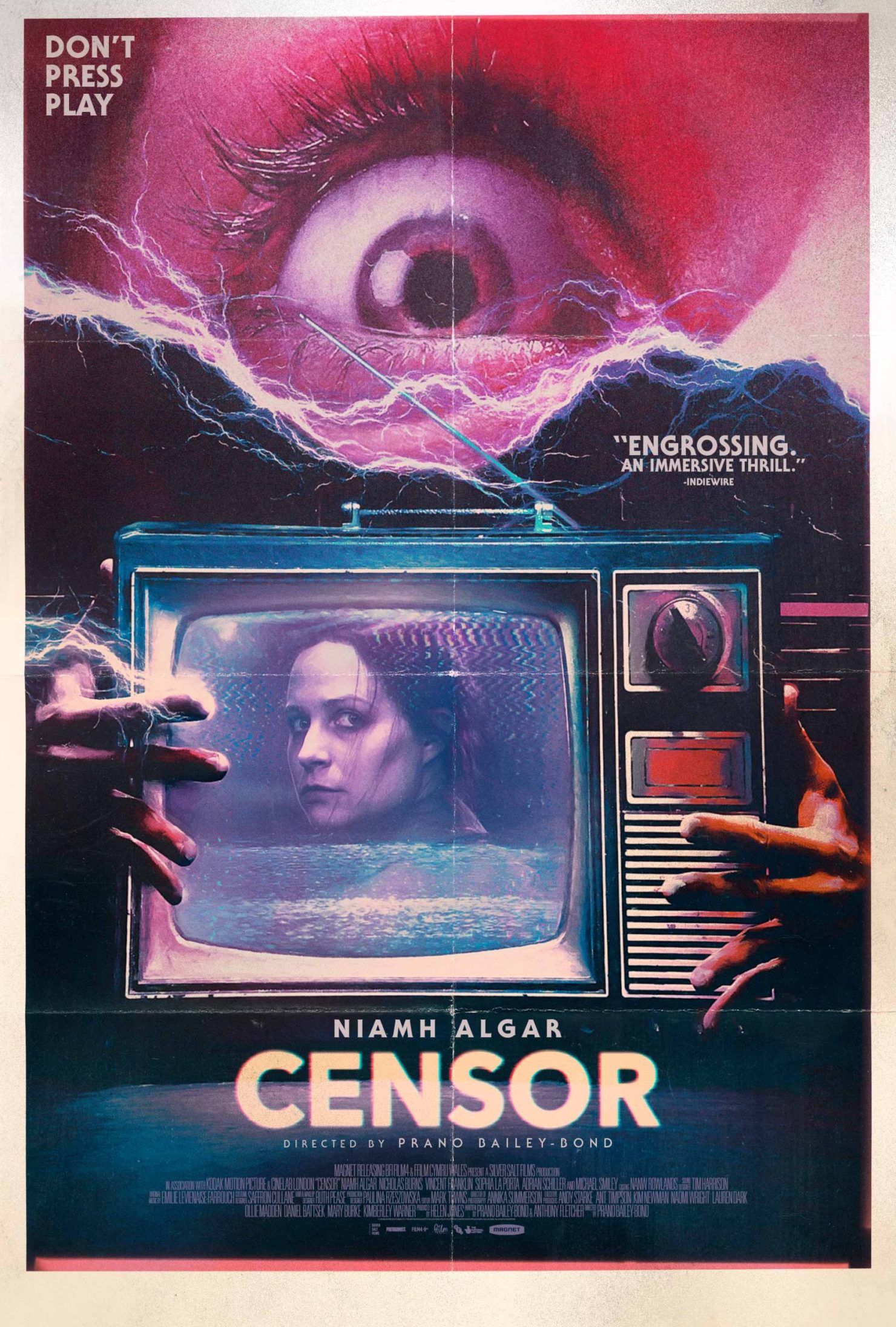 Inspired by giallo films and video nasties of the 80s, Censor is a surreal throwback horror/mystery that uses retro aesthetics for creepy atmosphere. Grainy film stock, stylized lighting, synth music, and questionable fashion basically acts as the movie’s dark shadows and howling wind. It follows the prim and tightly wound Enid, a censor for the British Board of Film Classification, as she descends into madness after seeing a woman she believes to be her long missing sister in a notorious horror director’s film. There’s an undeniable uncanniness about older looking media—cracks and pops on tape, scratches on an old film print, muted or sometimes hyperrealist color palettes, dated design… if anyone felt as disturbed as I did by Blackfish, the documentary about people being maimed by Orcas at SeaWorld, it may have been because so much of it included camcorder footage, a quaint analogue form of media capturing dorkily permed whale trainers and fanny-pack wearing crowds in bright 90s colors completely unaware of the abject horror they were about to witness. Censor knows the power of these types of images, and also the mysterious draw of the forbidden—the x rating, the rumored tape, the bootleg, the snuff film.

All of this makes for a sufficiently creepy viewing experience, but I’m still undecided as to whether the plot resolves satisfyingly enough. It’s unsettling to see someone who’s unhinged and completely unaware of it go careening into a nightmare of their own invention, all the while being subsumed by the lurid cinematic visuals once firmly outside of their reality but now inexorably seeping in, and yet this effect feels vaguely diminished due to a distance from Enid’s true psychology. Trauma from losing her sister as a child undoubtedly explains part of it, but the real root of her obsessions seems deeper than that, and the film frustratingly doesn’t do as much as it could to illustrate her complexity. Make no mistake, I don’t advocate for making films too obvious, and I appreciate subtext. Still, there’s a difference between being subtle and being undeveloped. Censor may or may not be one of those two. Niamh Algar’s lead performance as Enid, however, demonstrates unwavering commitment to the character, which makes her downward spiral compelling, even when it’s not convincing on paper and doesn’t bring the story to a justified resolution. For horror fans, the film is definitely worth checking out.

“A teenage runaway takes part in a sleep study that becomes a nightmarish descent into the depths of her mind and a frightening examination of the power of dreams.”

Coming Home in the Dark

“A school teacher is forced to confront a brutal act from his past when a pair of ruthless drifters takes him and his family on a nightmare road-trip.”

Down a Dark Stairwell

“On a fall day in 2014, Peter Liang, a Chinese American police officer, shot and killed an innocent, unarmed black man named Akai Gurley. Unfolding in the dark stairwell of a Brooklyn housing project, the shooting inflamed the residents of New York City and thrust two marginalized communities together into the uneven criminal justice system. Gurley’s death sparked cries of police brutality and a raging, anguished debate about racial bias in criminal prosecution of law enforcement officers”

“An injured forest ranger on a routine mission is saved by two off-the-grid survivalists. What is initially a welcome rescue grows more suspicious as the son and his renegade father reveal a cultish devotion to the forest.”

“As the world searches for a cure to a disastrous virus, a scientist and park scout venture deep in the forest for a routine equipment run.” 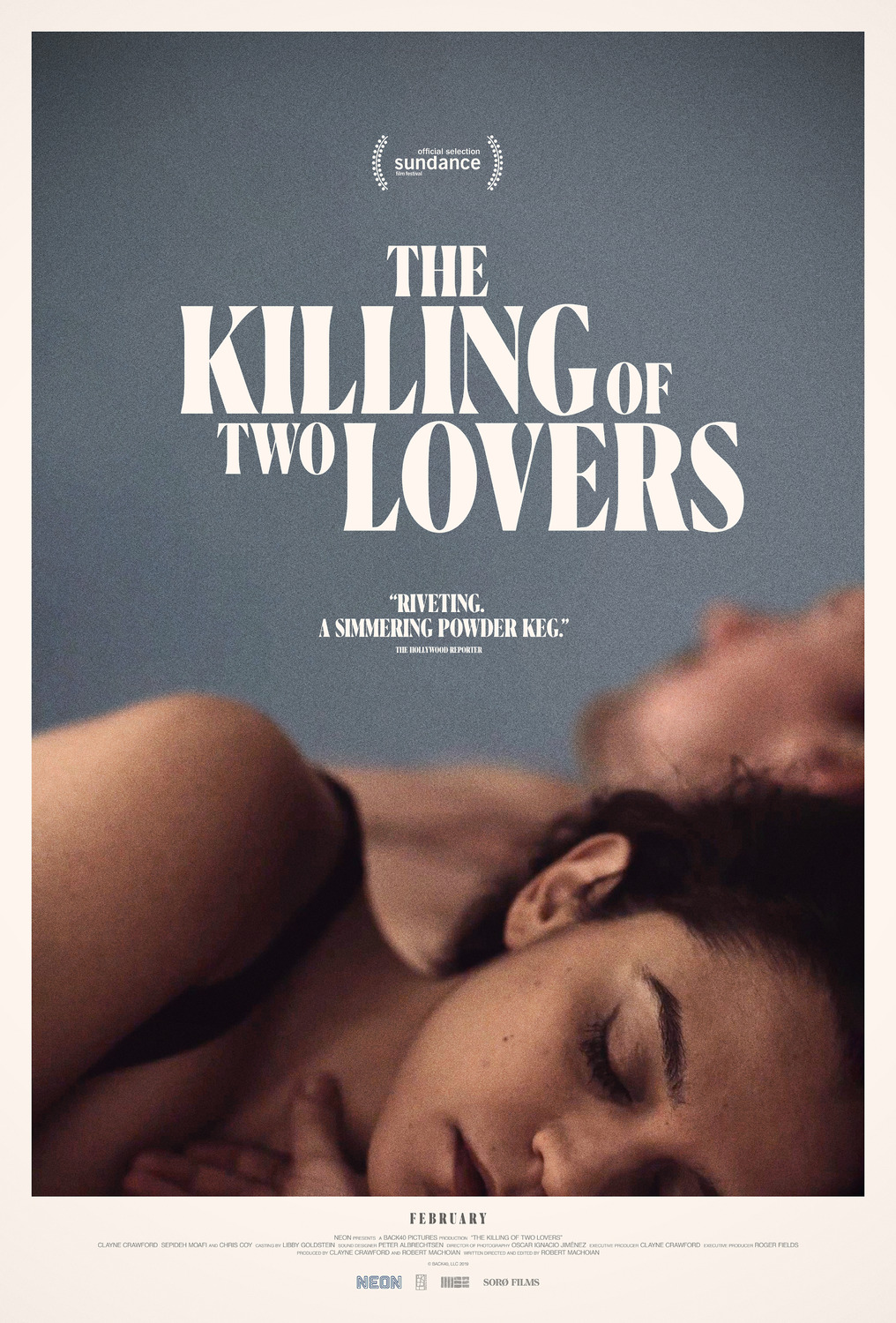 The Killing of Two Lovers

The Killing of Two Lovers

Robert Machoian, practitioner of the small-scale indie-film, delves into male rage and impotence, and the dependence on traditional gender roles among the working class, with this bleak but electric family drama. Clayne Crawford plays David, an out-of-work, failed musician who currently lives with his ailing father during a separation from his wife and kids. While his wife, Nikki (Sepidaeh Moafi), assumes custody of their sons and dates one of her shady coworkers, Derrick (Chris Coy), David subtly unravels from isolation, jealousy, and a confused sense of self—the main components of a masculinity crisis.

The film opens on David watching over a sleeping Nikki and Derrick and aiming a gun at them, and only changing his mind when he hears one of his sons walking in another room. While this drastic action paints Derrick as dangerously unstable and potentially violent, the ingenuity of the script is in its ability to soothe us into liking, identifying with, and ultimately rooting for this man, whose genuine charm, familial devotion, and humble circumstances force us to view his more extreme compulsions as not only understandable but even relatable. While this opening scene casts a shadow of suspense over the rest of the proceedings (this is a man who has already reached a breaking point before the film has even begun), David’s heartbreak, sincerity, and desperation manage to be compelling to the point that it almost makes one forget the irredeemable actions he once considered taking.

Cinematographer Oscar Ignacio Jimenez expresses a palpable sense of claustrophobia with the use of tight compositions and a restrictive Academy aspect ratio while at the same time capturing the vast, empty landscapes of rural Utah to emphasize David’s relationship to his sparse and immense surroundings, which keep him constantly isolated, diminished, and deprived. The film has an ambient score that consistently revives the tension when it has waned, often making use of a car door slamming shut to both jolt the viewer and to evoke the repetitive, tedious nature of David’s life and work situation, one that constantly has him driving back and forth from odd jobs, to school drop-offs, to tense meetings with Nikki.

As in the best character-driven stories, the ending has an unresolved quality that leaves the question of this family’s future hanging in the air, the tension no less worked-through than in that heart stopping opening. We’ve come to see David, Nikki, and their kids as people who all deserve to win, and yet their situation is one in which no one can win. Perhaps a realignment of their priorities, a reexamination of their dynamic as husband and wife, father and mother, could undo the damage that has been done. But the staying power of resentment, the toxicity of male entitlement, and the scarcity that arises in rural, working class life are anchors weighing them down. We’re left not with an indication of what lies ahead for these characters, but an understanding of who they really are, and what that understanding will mean for them going forward.

“An extravagant wedding unexpectedly turns into a class struggle which results in a violent uprising.”

“A viral video shows a white policeman throwing a Black teenager from her school desk. One woman helps the girl, faces the officer, and dismantles the system”

“After a floundering toy salesman rescues a beguiling woman whose car was stuck on the train tracks, she inadvertently whisks him into an epic series of misadventures that turn his life upside down.” 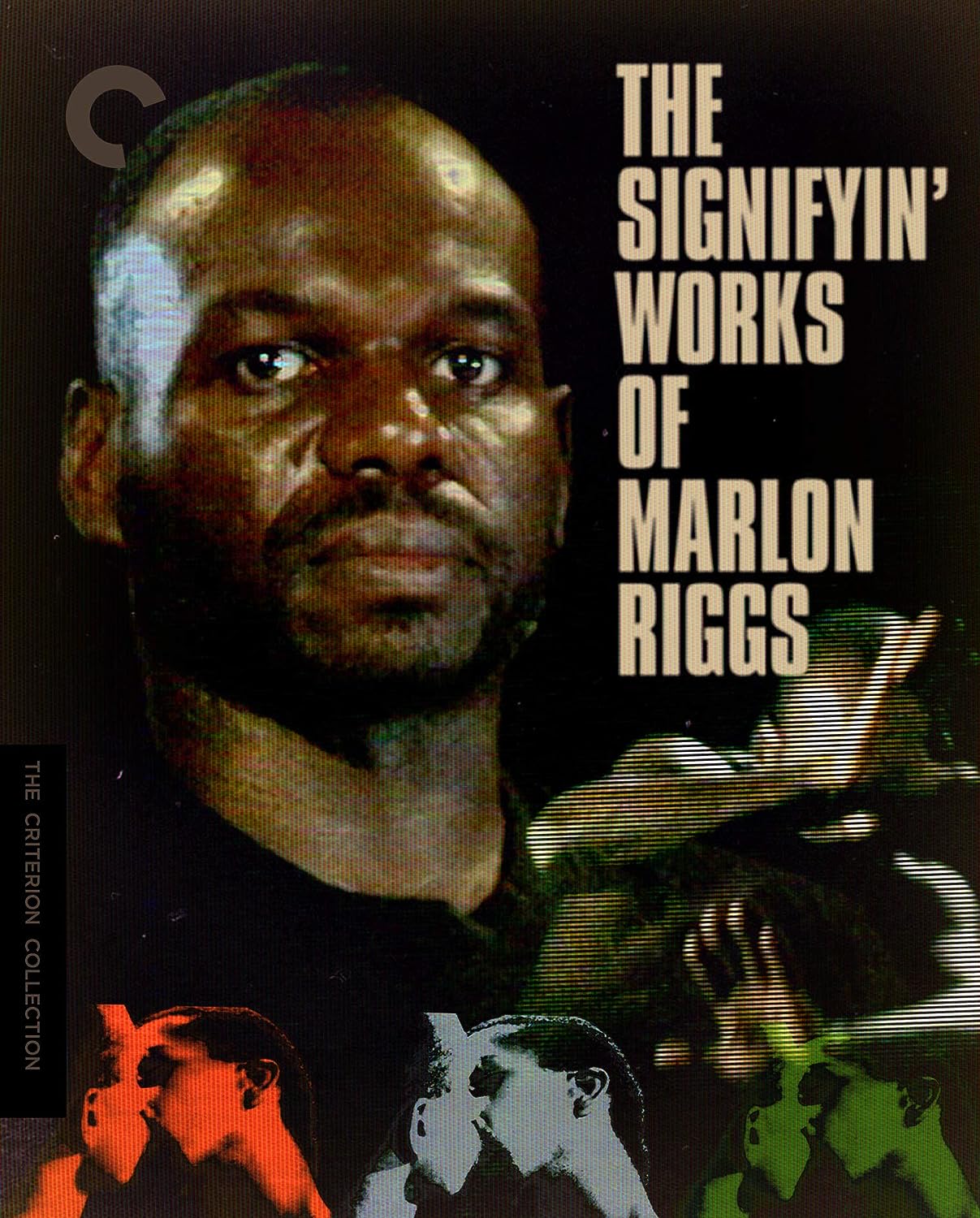 The Signifyin’ Works of Marlon Riggs

The Signifyin’ Works of Marlon Riggs

Marlon Riggs did the majority of his work between 1987, when his feature documentary Ethnic Notions was released, and 1994, with the posthumous release of Black is…Black Ain’t. Riggs died as a result of AIDS before the latter could be completed. All in all, he created four feature documentaries and three shorts during this period, all of them landmark works in black and queer independent cinema. This excellent release by the Criterion Collection gathers all of them, along with several invaluable special features and a booklet containing an essay by film critic K. Austin Collins.

Riggs’s work, documentaries but otherwise indefinable, used experimental cinematic forms, theatrics, poetry, and methods of visual essay to explore issues within the black community, particularly among gay black men, in a way that both informed and moved. He likened his approach to his mother’s gumbo recipe, a diverse combination of ingredients cooked into a cohesive and satisfying whole. They were distinct in that they were not didactic, aimed at the community they represented but accessible to others. His masterful work about the experiences of Black gay men, Tongues Untied, came under fire after airing on PBS from numerous members of congress who accused the network of promoting pornography. Of course, Tongues Untied contains no pornographic material, but the controversy surrounding its release speaks to how radical it was at the time. Such a brazen and honest depiction of affection between Black men, and an intimate and unyielding expression of their personal experiences and battle against HIV/AIDS, had not even been heavily featured in underground circles, much less on public television.

His two films on race representation in media, Ethnic Notions and Color Adjustment, also had PBS airings and introduced unfamiliar audiences to the critical study of images of Black people in our popular culture. For anyone interested in learning more about issues of blackface, stereotyping, and the perception of Blackness in this country, they come highly recommended. (Ethnic Notions would make a great double feature with Spike Lee’s Bamboozled, also available from Criterion).

Marlon Riggs should be considered a documentary staple, and so Criterion’s release of his work is an extremely valuable contribution.

“When a young girl recovers her hearing during the murder of her family, she begins composing music through a series of murders.”

“A formerly flamboyant hairdresser takes a long walk across a small town to style a dead woman’s hair.”

“Dogs influence our daily lives in simple and extraordinary ways. People need dogs, and perhaps they need us, but what do humans do to deserve the unconditional love they provide?”

Dec
7
Wed
all-day First Art at Home
First Art at Home
Dec 7 all-day
First Art at Home December 7, 2022 Introduce your little one to the tactile wonders of paint, glue and more with these easy at home art based activities. Recommended for 18 months to age 4.[...]
7:00 PM Adult Craft Night: Holiday Craft...
Adult Craft Night: Holiday Craft...
Dec 7 @ 7:00 PM – 8:30 PM
Celebrate the holiday season with three crafts to boost your decorating and gift-giving spirit. This is an adult crafting program. All materials will be provided. Masks are recommended. Registration is required and attendance is limited.[...]
Dec
8
Thu
9:30 AM Books for Babies
Books for Babies
Dec 8 @ 9:30 AM – 10:00 AM
Thursday, December 8, 2022 Age 6 months to 2 years. Books, lap bounces, songs, rhymes and more are what you’ll find at this storytime geared to 6 months- 2 years! https://www.canva.com/design/DAFIT3h3lJ8/view
10:30 AM Storytime
Storytime
Dec 8 @ 10:30 AM – 11:00 AM
Thursday, December 8, 2022 Ages 2-5 years Join us for storytime geared to ages 2-5. https://www.canva.com/design/DAFIdz9RY0A/view
7:00 PM Good Yarns Stitching Club
Good Yarns Stitching Club
Dec 8 @ 7:00 PM – 8:30 PM
If you knit, crochet, cross stitch, embroider, or do any other fiber crafts, unwind at our monthly Stitching Club! Bring the project you’ve been neglecting or your fresh ideas for a new piece. Maybe you’ll[...]
7:00 PM Teen Creative Writing Club
Teen Creative Writing Club
Dec 8 @ 7:00 PM – 8:30 PM
Thursday, December 8, 7:00-8:30 pm Looking to grow as a writer or bond with other teen writers in your community? Join the Teen Creative Writing Club where you will receive monthly writing prompts and the[...]
View Calendar
Add