Award-Winning novelist, Diana Abu-Jaber chosen for One Author, One Kirkwood 2022

Award-Winning novelist, Diana Abu-Jaber chosen for One Author, One Kirkwood 2022

Her latest novel, ‘Fencing with the King’ releases March 15th, event to be held April 6th at the Kirkwood Performing Arts Center

One Author, One Kirkwood is a yearly community reading event for people throughout the St. Louis area. A One Author, One Kirkwood committee chooses an author and hosts fun and thoughtful discussions around their work that address important social topics affecting our community and the larger world. The library chose Abu-Jaber because of her connection to literature from Shakespeare to Arthurian fables, and readers will love her ability to seamlessly tie together food, family, and Middle Eastern culture.

Diana Abu-Jaber was born in Syracuse, New York to an American mother and a Jordanian father. When she was seven, her family moved to Jordan for two years, and she has lived between the US and Jordan ever since. The struggle to make sense of this sort of hybrid life, or “in-betweenness,” permeates Abu-Jaber’s fiction.

Abu-Jaber’s novel Birds of Paradise won the National Arab American Book Award, was named a top book pick by The Washington Post, NPR, The Chicago Tribune, and The Oregonian,and  is a deeply moving portrait of a family falling apart after their teenage daughter runs away. Her memoir, Life Without a Recipe is a celebration of improvisation, of unexpected detours, and of living life on one’s own terms. Her forthcoming novel, Fencing with the King, is a novel of Middle Eastern intrigue and suspense. Masterfully drawing on King Lear and Arthurian fable, Fencing with the King will explore the power of inheritance, the trauma of displacement, and whether we can release the past to build a future.

Books can be checked out at Kirkwood Public Library or ordered from Left Bank Books. More information about the event can be found on the library’s website. https://kirkwoodpubliclibrary.org/1book1kirkwood/

About Diana Abu-Jaber:  Abu-Jaber received her MA from the University of Windsor, where she studied with Joyce Carol Oates. She later attended SUNY-Binghamton for her PhD. She has taught creative writing, film studies, and contemporary literature.

Her stories, editorials, and reviews have appeared in Ploughshares, North American Review, The Kenyon Review, Story, Good Housekeeping, Ms., Salon, Vogue, Gourmet, The New York Times, The Nation, The Washington Post, and The Los Angeles Times. She is frequently featured on National Public Radio and wrote and produced an hour-long personal documentary for NPR entitled The Language of Peace. For more information on Diana Abu-Jaber, please visit dianaabujaber.com.

About Lara Hamdan: Lara Hamdan is currently the engagement editor at St. Louis Public Radio. She previously worked on the station’s daily, call-in talk show, “St. Louis on the Air”, for four years. As a producer for the daily call-in talk show, she booked and produced wide-ranging segments about local news, politics, history, science, technology, music and culture. Her main focus now is engaging with audience members across platforms and building trust and connections across the region. She enjoys discovering new people and gems in the region throughout her work at St. Louis Public Radio. 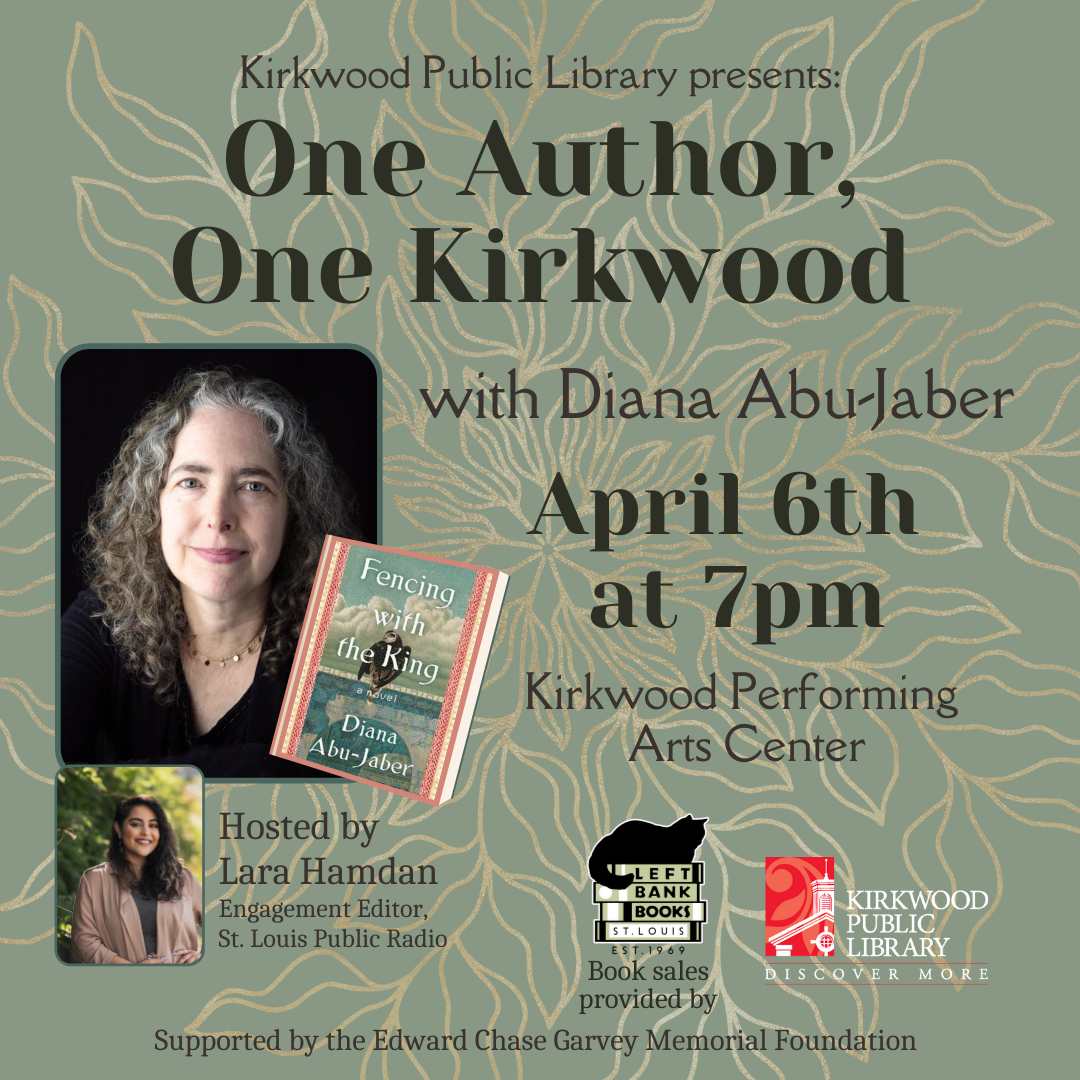 Mel Lambert is the Director of Adult Services at Kirkwood Public Library. She loves assisting small businesses, startups, and entrepreneurs with using FREE library resources to grow their businesses.